An excerpt from The Decibel Diaries: A Journey through Rock in 50 Concerts by Carter Alan

Tom Petty and The Heartbreakers: even the losers get lucky
(third time)

My buddy Clint and I waited for an inbound trolley, staring hopefully down the empty rails divided by crushed stone, wooden ties, and pizza joint litter. Fragments of glass glittered in the bright street­-light glare of a cold November night that forced us to shuffle about to keep warm. A Green Line train, if it ever came, would take us down the center of Commonwealth Avenue past the classrooms at Boston University, then plunge under Kenmore Square where we had witnessed many a punk-­rock show at the already-­legendary Rat. Heading downtown under the streets of Back Bay, we’d exit at Park Street, walk upstairs, and pop out in front of the Orpheum Theater, where the marquee tonight read Tom Petty and the Heartbreakers. Of course, we were excited; the Gainesville native who had journeyed to Los Angeles to find fame and fortune in rock and roll had reached a high-­speed career trajectory after punching through with his debut album a couple of years earlier. “Breakdown” from that release had been the initial American hit, and the meteoric, under-­three-­minute, scorcher, “I Need to Know” from a solid second album in ’78 continued the upward thrust.
Right across the street from the trolley stop we were stomping around on stood the Paradise Theater, where Petty and his band had played an epic sold-­out gig the previous July that aired on Boston radio powerhouse WBCN. Those that managed to get tickets were already believers, but the broadcast convinced thousands more who couldn’t get in that this white-­hot group was on to something — a fresh reboot of rock and roll straight out of a stack of Elvis Presley, Chuck Berry, and Buddy Holly 45s. I thought about how amazing that concert had been, so mind-­blowing that I had never regretted laying out the extra cash for a scalper’s ticket; in fact, I wish I could find that scruffy street capitalist and give him a big hug. Petty’s band, especially right-­hand man Mike Campbell on guitar, had stuck to their leader like glue, elevating his every move and forcing a worthy comparison to nothing less than the gold standard of Bruce Springsteen and the E Street Band.

A distant squeal of metal on metal whisked me back from a year and a half ago as an ancient trolley made the corner down the street and rumbled drunkenly toward us. The rusty doors swung wide with a screech and we stepped in. This car should have been retired years ago, but the cranked-­up heat worked fine, so we weren’t about to complain. My mind started wandering again: Petty had been away for a long time from what he and his management considered a key city during this early and critical period of building a success story. The new single, “Don’t Do Me Like That” and songs from the third album Damn the Torpedoes that had just appeared on the radio had actually been delayed by intense music business drama for several months. We had no idea that was going on until interviews with Petty began appearing in newspapers just prior to his return. Instead of working on the road to promote his career, the rocker had spent a major portion of a year raising his right hand and swearing to tell the truth in court. Like a pantheon of young players before him, Tom Petty had originally signed a record deal that assigned him a paltry percentage of any profits and no ownership of his publishing rights. Then, his record label was gobbled up by industry giant MCA in 1978. Fearing he’d be lost in the shuffle at the corporation and also desiring a more equitable deal, Petty invoked a clause written into the original contract that allowed him free-­agent status if his label was ever sold. Even so, MCA refused to let go, suing the band and locking the two parties into a legal struggle that forced Petty into bankruptcy. Recording a third album had already begun and continued during this process, but with MCA threatening to seize any master tapes and release whatever music it found, the group handed off the precious results of each day’s work to one of its roadies, whose assignment was to hide the masters from the musicians and even Tom Petty himself until the next session. This arrangement shielded the musicians from committing perjury in court should MCA’s lawyers demand the tapes.

The wheels of justice ground slowly, but Petty’s tenacity remained strong. Eventually, when it appeared likely that he’d actually win the case, MCA caved in completely, giving the songwriter rights to his publishing, a better percentage of the profits, and a custom label for the band that the media giant would distribute. With this process, MCA gave Petty his freedom, but held the bright, young talent close in its corporate grasp. The master tapes were summoned back from their clandestine location and released as the album Damn the Torpedoes, which became a ticket to ride as it ascended to number 2 on the U.S. album-­sales chart and sold millions. In November ’79, “Don’t Do Me Like That” hit the charts and eventually took Tom Petty to the Top 10 for the first time, followed early the following year by further hit singles “Refugee” and “Here Comes My Girl.” Suddenly great demands were being made on the musicians’ time and energy with scads of newspaper and radio interview requests and an invitation to guest on Saturday Night Live. The opportunity for the November 10 TV appearance could not be ignored even though it meant postponing his Boston concert at the Orpheum Theater the night before so that Petty and his group could be in New York to rehearse. They’d only perform two songs, but it was critical to get them right; at the time, SNL was the foremost promotional vehicle a rock-­and-­roll band could get on American television.

We had our tickets for Friday the ninth, but got word that the concert would be postponed to the following Wednesday. Disappointing, yes, but at least the Boston appearance hadn’t been cancelled outright. I had an excellent eight-­dollar mezzanine ticket burning a hole in my pocket; it would just have to smolder in there for another five days. When Wednesday night finally arrived we jumped out of that train and practically sprinted up the steps to leave the subway station. Right across the street was the alleyway leading up to the front doors of the old vaudeville theater. But as Clint and I rounded the corner, we were practically mowed down by a wave of figures marching full tilt in the opposite direction. What’s going on? People should be rushing toward the building at this point. But we kept bumping into bodies, struggling upstream as if fighting a white-­water torrent. I picked out words from the fleeing figures: “I can’t believe it,” “What do we do now?” and “This sucks!” We finally reached the front doors where several ushers, wearily repeating themselves over and over again, yelled, “The show is postponed because of sickness . . . hold on to your tickets!” Really? Tom Petty was postponing a second time? Plus, it was at the last possible moment.

Mikal Gilmore, following the tour for a Rolling Stone article, sat backstage at that moment. He detailed in his piece, published in February 1980, that Tom Petty had been under the weather for several days and felt he had blown his previous night’s performance in Philadelphia. Gilmour wrote: “By the time of the group’s sound check, Petty can barely croak. With just an hour remaining before the doors are scheduled to open, he agrees to postpone the show.”

We were certainly disappointed, but understood. It was obvious, even at this early stage in his career, that Tom Petty was a perfectionist. Committed to the quality of his performances as much as he remained devoted to the craft of writing great songs, his meticulousness was often overlooked, submerged by an enduring image as a laid-­back, long-­haired stoner from Gainesville. But it was that attention to detail and driving ambition that had placed the artist and his band at a perfect point in rock-­and-­roll history. After the punk explosion had driven a boot through the door a couple of years earlier, exposing a scene of complacent rock stardom and excess, a host of what became “new wave” bands piled through the hole, scattering the bloated occupants in the room beyond. Some star bands like Emerson, Lake & Palmer, Electric Light Orchestra, and Supertramp would never really recover; styles such as southern rock and progressive rock were driven into background roles while other groups, like Yes, took sabbaticals until some of their relevance to the mainstream returned. Tom Petty and other lean late-­seventies rock and rollers such as the Police, the Clash, Elvis Costello, Talking Heads, the Cure, AC/DC, the B-­52’s, and (in England) the Jam and XTC had grabbed the flag and taken up the charge. It was a whole new field of battle out there, and the musical world was being remade in front of our eyes and ears — we wanted to be right in the thick of it!

The show must go on, and it finally did on November 19. The band walked triumphantly out on stage to a tumultuous reception, drummer Stan Lynch sporting a comical T-­shirt with the three scheduled Boston concert dates written on it and the first two crossed out. Petty admitted he was recovering slowly and still on antibiotics, but you wouldn’t have noticed it as the group accelerated into a breakneck two-­hour show that left everyone in the house panting in exhaustion. All the new songs from Damn the Torpedoes that would soon become classics hit their mark, rising to meet and challenge the proven in-­concert standards like “Listen to Her Heart” and “American Girl.” In a monumental Tom Petty and the Heartbreakers performance, the band piled on three scoops of effort to compensate for the missed dates. But as I would discover in subsequent years, this was actually their standard operating procedure: punch the pedal at the beginning, kick in the nitrous about three-­quarters down the track, and only take the checkered flag when the last fan had collapsed in a puddle of sweat or simply couldn’t clap any more. We reached the peak when Petty tore into a cover of the Isley Brothers’ “Shout.” Anyone who hadn’t heard the 1959 R & B classic in years past knew the song intimately because of Otis Day & the Knights’ recent party version in the Animal House film. Petty made a party of it too — for ten joyous, rollicking minutes of pulsing dance fever. The playful call-­and-­response between the band and the crowd involved everyone, convincing even the last holdouts in the Orpheum to give it up and join in. As the final echoes faded on a night when Petty made losers feel like heroes and refugees taste home, he showed us what rock and roll was all about — giving it all and making us shout! 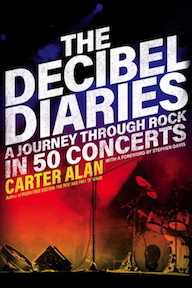 CARTER ALAN is the midday DJ and music director at WZLX-FM, Boston, one of the nation’s first classic rock stations. He is the author, most recently, of Radio Free Boston, and previously of Outside Is America: U2 in the U.S.
Posted by University Press of New England at 11:08 AM No comments:

A trade imprint from UPNE